Pickleball is a fun game that is played on a badminton-sized court (indoors or outdoors) with the net lowered to 34 inches at the centre.  It is played with a perforated plastic ball (similar to a whiffle ball) and wood or composite paddles.
It is easy for beginners to learn, but can develop into a quick, fast-paced, competitive game for experienced players.  Regardless of skill level, it develops quickness of mind, faster reflexes, and uniquely activates portions of the brain that few other sports do.
It is a highly social game, bringing players into an environment where contact with others is a requisite part of the sport.
Its benefits for exercise and as a social experience are unparalleled.
Here is a quick explainer video to tell you what you need to know to get started with North America's fastest growing game.​

The Origins of Pickleball

Why call it pickleball?

Pickleball has a very interesting name, especially since no pickles are used. Accounts of how the name originated differ.
(1)According to Joel Pritchard’s wife (Joan), she started calling the game pickleball because “the combination of different sports reminded me of the pickle boat in rowing where the crew were chosen from the leftovers of other boats”.
(2) However, according to Barney McCallum, the game was officially named after the Prichards’ dog Pickles who would chase the ball and run off with it. According to McCallum, “The Pritchards had a dog named Pickles, and you’re having fun at a party, right? So anyways, what the hell, let’s just call it pickleball.”
Others claim both accounts may actually be true. In the early years, no official name was assigned to the game. However a year or two after the game was invented, the Pritchards purchased a cocker spaniel and named it Pickles. As the game progressed, an official name was needed and “pickleball” was it.
Co$t & Ease of play 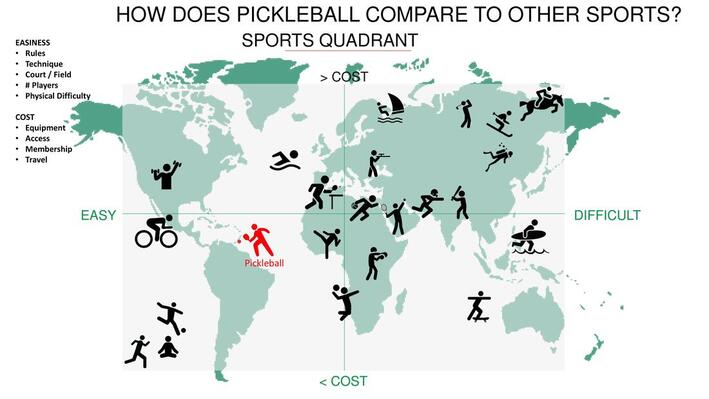